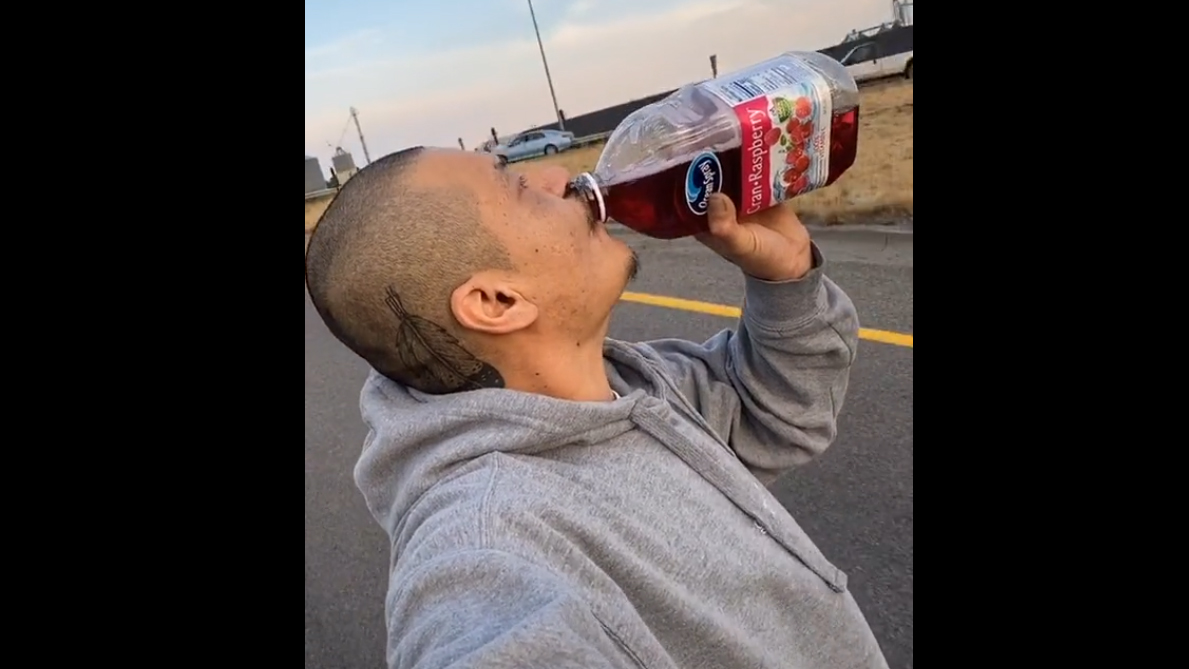 Nothing but laughs and good vibes

Tiktok has exploded in popularity and allowed millions of users to explore the creative side of themselves.  Tiktok, for those who do not know, is a user generated content app.  It allows users to create 15-60 second videos.  They can add music and the app has a lot of great editing tools.  It also has a simplified interface to allow people to easily find and watch the videos.  You can find topics ranging from history, to science, to cultural interests and to social awareness.  You will also find a lot of dancing!

2020 was a very creative year and this is our top 16 Tiktok videos.  In this list, we excluded celebrities and focused on content that was as unique as possible.

Happy 20th birthday to my Jules!

The use of wine glasses to cut this cake is one of those “waaaaaaaa?” moments.  Everyone’s jaw dropped at the possibilities of not only cutting a cake easier but not having to mess with paper plates, cutting exact portions, or having one person designated as the “cake cutter”.  One tiktok mom’s brilliant clip opened up a new world of possibilities. After seeing this video, everyone wanted to go buy a cake to try it.

This is every checkout cashier everywhere. The cat perfectly captured the bored numbness of ringing up hundreds of items an hour. As a customer/viewer, you are left to wonder “she’s not even looking, is this all correctly rung up?” However, we do not want try to stop the speeding train of groceries because you have stuff to do.

The song originally was a 2010 jingle for a commercial in Russia for cereal called “Miel Pops”.  Someone got the idea to post a video of an animated llama dancing to it. The commercial had bees dancing around singing. “Zhu Zhu Zhu” is the Russian equivalent of buzz buzz buzz. This gained extreme popularity in the “weird” side of tiktok and broke into the mainstream of tiktok soon after.

Unfortunately for an unknown reason, the creator of this video deleted it. Luckily, someone had a copy. It is a brilliant flash mix of Judy Hops from Zootopia. She does a great job mimicking the facial expressions of Judy hop to great effect. The background music perfectly matches the back and forth transformation.

This video shows off another cool (or creepy) trend by using the Face Builder Effect on snapchat. The video is funny because it shows the paradox of a woman with a British accent teaching English to Tarzan who somehow magically repeats it in an American accent. This paradox is never explained in the movie. He learns his accent magically from nothing.

Over the past few years, there has been an explosion of DNA testing companies. People are extremely interested in finding out their heritage and filling out their family tree.  Unfortunately, sometimes family secrets get exposed in a real life hallmark movie drama. This story teller uses humor to deflate terrible news.

The battle of men protecting their beloved bird feeders against squirrels has been going on since the first old man yelled “get off my lawn” thousands, maybe even millions of years ago.  Great feats of engineering have been proven worthless in the face of a tiny furry animal. One bored user decided to record his neighborhood gang of fuzzy thieves and put it to music.  The result…hilarious and magical.

Another great trend is a user dueting another video and either commenting on, joining in or interacting with the other video on a split screen. This is a great example of someone enjoying an old woman spending time with her pet stingray, with a twisted surprise at the end.

We all play twisted pranks on each other but usually one person is way better than the other.  This user used some great editing skills to produce this tiny master piece.

There is a filter on snapchat that allows you too see what you look like as a Disney princess. This is a perfect example of expectation vs reality clip.  We love how this creator uses humor to show the reality we all face each day as we look at ourselves in a mirror.

Every mom loves it when their little girl sings in a beautiful voice. This clip starts out this way but ends up taking a very funny different turn.

Should’nt Have Done That

This is exactly what every cat owner goes through when a visitor tries to pet their cat.  Great editing and acting in this short clip.

Technology is an amazing thing, however for some people, it can be a confusing nightmare.  If someone hasn’t stayed current with the latest gadgets for 10 or more years, a new device will look like some alien technology.  This cute grannie’s experience with text talking is so relevant to anyone teaching someone who isn’t tech savoy.

Another expectation vs reality video.  We all see those super cool devices in an ad and think “wow, i need that”. If it is for your pet?  Impulse buy on crack!  This is a really funny example of this.

M to the B

According to Tiktok this is the most popular Tiktok of 2020. The music in the background is from an English rapper named Millie B and the music was clipped from the very last part of her track. The video blew up after the creator of the video was cyber bullied for it.  So the Tiktok community came to her rescue and thousands of user dueted it with her. This shows the power of positive reinforcement can do to counteract negativity.

Nathan Apodaca’s children got him interested in Tiktok. So he decided to start uploading videos of him dancing and doing everyday stuff.  This video of him skateboarding down the streets of Idaho while drinking Ocean Spray Cranberry juice immediately went viral.  It got so popular that Stevie Nicks got a huge boost as well as Ocean Spray and skateboarding while being chill.  This video optimizes the idea that any new technology or app can be adopted by anyone regardless of age or trendiness. It is the 2nd most viewed Tiktok of 2020 for a reason. We however think this the best Tiktok of 2020 because it shows the power of being positive and how it can influence people all over the world.  Nathan Apodaca, we salute you for having the best Tiktok of 2020!

Have a story to tell? Tag us in your video and we might highlight it in our gallery.