It was 4 pm on Tuesday evening (the day before the show), when Bounce Music Festival released the news. Due to hurricane Sandy, Dada Life, Borgore, Dvbbs, and Modern Machines would perform at an indoor barn 10 minutes from Indiana University’s campus rather than the original outdoor venue, Pic a Chic Farms, 20 minutes off campus.

I never expected attending an EDM show in a barn. However, the venue ended up working out pretty well. The sound quality was fantastic – you could feel the bass. When Dada Life took the stage, fans were surprised for two reasons: only one of the two members in Dada Life was present, and Dada Life took the stage extremely early, very unusual for a headliner. One half of Dada Life was actually in the hospital for the night. Some Bounce attendees were happy that Dada Life went on so early while others were disappointed.

Either way, Dada Life put on a show. There were real and inflatable bananas flying everywhere and champagne was poured onto the crowd, the typical routine at a Dada Life concert. When it was time for Dada Life’s famous song, “Kick out the Epic Motherf**ker,” the crowd erupted in chaos. The insanity was unreal with glow-sticks and lasers lighting the air, people jumping up and down, fist pumping, people in banana suits both onstage and in the crowd, and of course singing along. There was no denying that the fans helped make a great show.

After Dada Life, a heap of people drenched with sweat and champagne hurried to catch a breath of fresh air outside. The great thing about this venue was that fans could hang out inside and out. The aroma of sweat, champagne, and bananas was lurking in the air – not a pleasant smell.

A change of pace happened rather immediately when Borgore took the stage. Dubstep lovers got filthy and grimy with their friends. Others simply watched Borgore work onstage. It’s tough to say whose set was better. Dada Life may have had the right props, but Borgore definitely threw down as well. After about an hour and a half of getting nasty, I was hit by the unpleasant smell of sweat once more. However, I was glad to know that people were getting so into the show.

Every year, Bounce throws at least two shows for Indiana University: one in the fall, and one in the spring during the week of the infamous Little 500. Despite challenging weather conditions, the Bounce crew pulled off a successful show. I am excited to see what Bounce has in store this spring.

Be sure to check out Bounce Music Festival: http://bouncemusicfestival.com/ 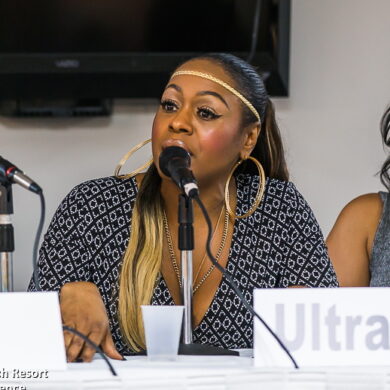