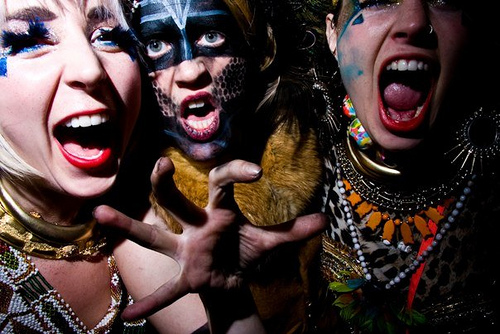 At BeachMonkey, we are always looking for the next big thing. In the world of electronic music, I think I found a good candidate that combines the best of dubstep and tribal house: moombahton.

Well, I didn’t actually find moombahton on my own. I’m a fan of DJ TJ, a young woman who plays awesome dance tunes at ungodly hours on KTUH, the college radio station for the University of Hawai’i-Manoa (check out her blog at www.djtjhonolulu.blogspot.com).

A while back, TJ threw on a jam called “Que Que” (click here to listen) and I was instantly hooked. It is electronic music in its purest form- bits of sound strung together, repetitive bursts of vocals, and strong riffs of mildly wonked melody, musical but almost not. “Que Que” is in the range of 110 beats per minute (BPM) and is all too easy to dance to.

Some History: Play I Some Music

Moombahton has its roots in dubstep, which has significant roots in Jamaica. When reggae was wildly popular in the mid-1980s, Jamaican musicians came up with the “dub” (double) of their songs: remixes of hits that were stretched out, given lots of echoes, and vocals minimized to a few words. Dub lets your mind expand in a sonic wilderness, but it is not dance music unless you are very, very stoned. Nevertheless, it was good stuff.

Dubstep picked up on the studio-crafted spaciousness of dub and made it danceable (check out the Rusko remix of “Splash” by Focus). By slowing down a song below 125 BPM, yet keeping a doubled-up drum-&-bass beat embedded in it, a dubstep artist can shift the pulse between fast and slow in ways that can blend the strengths of both. Its flexibility is why dubstep sounds so good on the dance floor: if a song is too slow for too long, the dancers may feel as if they are about to fall asleep. If it is too fast, they may go numb, worn out by the pace. If it is in the sweet spot (120-130 BPM) like most house music, then it may be too bland.

Dubstep allows dancers to shift gears between fast and slow, or remain in a zone in which both are happening at the same time. And this is the secret ingredient in moombahton, except moombahton keeps the pulse more consistent with more percussion and less gear shifting, like a slower version of tribal house that Circuit boys and girls love so much. The slow beat in mumbahton is not too slow, and the fast pace of lyrical chops (similar to some reggaeton songs) is more like a stimulant energizing the pulse rather than an actual beat to which people must keep.

The person who is credited with starting moombahton is Dave Nada. At a party for his younger cousin in 2009, he slowed down the Afrojack remix of “Moombah” to 108 BPM. The name “Moombahton” is a combination of “Moombah” with “reggaeton,” giving a nod to the slower pace of reggaeton when compared to other house music genres. There are more differences, including vocals-as-percussion (both spoken word and singing), strong, internally consistent build-ups, and creative use of interesting sounds that, like vocals, are turned into percussion or are added as attention-getting riffs.

DJs would do well to look at moombahton as a good source for increasing dance floor energy.