It was 12:20 and Leighton James from Adventure Club stepped out onto the stage of the Bluebird on N. Walnut Street in Bloomington, Indiana. But wait…where was Christian Srigley, the second member of the group? Srigley was unable to make the trip to Indiana University due to recent back problems. Now, twenty minutes later, James was ready to rage. With local openers X-5ight and Shy Guy Says setting the tempo for Adventure Club, the crowd too was ready to get crazy.

Attendance was a bit lower than average at the Bluebird, but this didn’t stop Adventure Club from throwing down. When the song, “Downfall of Us All” by metal band A Day to Remember was mixed into AC’s set, the crowd began moshing. Since James is a metal fan himself, he wanted to throw not just one but two metal tracks into his set. The crowd was very pleased with the variety. Since they are good friends, AC dropped some of Krewella’s tracks as well.

“I walked into the room dripping in gold…”

“CRAVE YOU! My favorite song!” This was the cry of AC fans throughout the entire building when chart topping AC remix, “Crave You” came on. This remix has not only reached the top 5 on multiple music websites, but it has also stayed the #1 EDM song for months on some of them. Many thought that “Crave You” might be the last song of the night, especially since AC’s set was supposed to only be an hour and a half. But James and the crowd apparently wanted more. Two hours from the start of his set and James was finally ready to wind down for the night. What about an encore? The people in the Bluebird received a half-hour more.

Walking out of the Bluebird, I only heard positive remarks from the crowd. James may have been without his partner for the night, but the crowd made sure he didn’t feel alone.

Prime Social Group, based out of Columbus, Ohio was the main sponsor for the Adventure Club show at Indiana University. This show was the end of a series of Halloween-week events in multiple cities for PSG: Wednesday – Mimosa and Krewella in Columbus, Thursday – Big Gigantic and Griz in Cincinnati, and of course Friday – Adventure Club at Indiana University. PSG’s upcoming shows include performances from 3LAU, Adventure Club, Fedde Le Grand, and Tiesto. Lastly, their infamous month-long college spring break party in Puerto Vallarta, Mexico, Electro Beach, will take place in March. EDM fans across the world have a lot to look forward to.

For more info, check out Prime Social Group at http://www.primesocial.com/ and https://www.facebook.com/primesocial?fref=ts 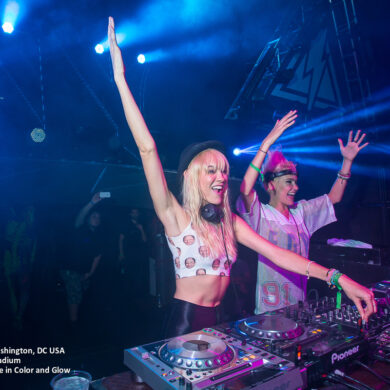