Arkona: From Russia With Love 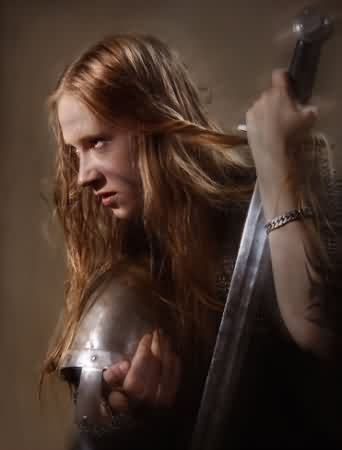 We at beachmonkey.com cover a range of topics in the nightlife-beachlife-good life scene. Let’s step away from electronic dance music, and enter the realm of heavy metal. Russian pagan metal, to be exact.

None of these bands, however, could rightly be called pagan metal (although Huntress did give a nod to witches in the audience), a genre that puts together metal’s crash and thunder with elements of traditional European folk music and pre-Christian spirituality. Pagan metal is the realm of Arkona, a band fronted by Masha Scream, her husband Sergei Lazar on guitar, Ruslan Kniaz on bass, Vlad Artist on drums and Vladimir Volk on wind instruments.

Masha, a mother of two children, sings about Damp Mother Earth (synonymous with Mother Russia) and her people’s warrior past to honor her ancestors. Masha also has a surprising nontraditional talent: she switches from strong female vocals into “cookie monster” death-growl within the same song.

Arkona has stage presence. Band members wore traditional Russian tunics with embroidered collars. Masha added a wolf skin over her tunic and beat a hand-held Siberian drum. Around her, bass, percussion and guitar came together with that hurricane force that is the signature sound of metal, clean and clear on Peabody’s excellent sound system.

Volk started things out with bagpipes and progressed to flutes. Their first number “Arkaim” had a distinctly Russian sound. The shrill melody from Volk’s instrument of choice, Masha’s alternating sing-wail-growl, and the driving metal sound from the rest of the band made for an intoxicating mix. Fists were in the air for every song. Lyrics were all in Russian, but nobody cared. The English-speaking audience was entranced by the sound of Russian words. The crowd chanted with Masha to “Zaklatie,” a song that has a shamanesque refrain, “Heya, heya heya hey-ya.” There is currently a buzz in folk-metal-land about translating the rest of the lyrics.

Although the group may not use these exact words, the message in Arkona’s music can be summed up as this: Honor and Protect Your Mother. Arkona’s fierce love for Mother Russia/Nature is grounded in the real world as well as the world of spirit, in awareness of the fertile, damp earth of their homeland as a living force.

Masha explains the connection, but with a warning. “Nature created us, which means we have the right to exist,” she said, “but only in harmony with nature.”

Head-banging, love of country and love of the Earth – Arkona is so worth seeing live.

Note: Special thanks to Lauren Welker for dragging me to the concert, then helping me with translation from Russian to English.