Singer Eric Redd cuts an imposing figure: tall, impeccably dressed, dreads. Five minutes of conversation, and it's clear the man has depth. And if you've ever seen him dance, you know he can cut a rug.

During Winter Music Conference 2015, we sat together with Rod Carrillo and DJ/producer Kissy in the lobby of the Deauville Hotel to discuss the twists and turns of electronic dance music. All three are part of Carrillo's musical family, a collective of artists who are making waves in the industry. Redd's hit, “Breathe,” in fact was produced by Carrillo for Carrillo Music.

Tell us about your relationship with Rod.

You left EDM for a while as you made a name for yourself in rock with California Transit Authority [CTA]. What brought you back?

I was a dancer first, before I started doing music professionally, so dance, dance music and the feeling of movement inside or outside of me is where my soul lives. CTA was a very unique experience. The band has so many fans worldwide, it was an honor just to be asked. I loved the music, loved the band and really enjoyed the crowds. But it never came from the same place within me that dance lives. My relationship with dance music is intensely personal. Rock always felt like I needed an audience. Dance music is like dancing for me… pure solo artistic freedom.

Tell us about the Soul Train years and working with artists such as Tessanne Chin.

I started my career as a dancer on Soul Train. Such an amazing place to have been as a teen. The biggest show on television, the biggest stars in music, and one of the greatest black entrepreneurs of television [Don Cornelius] running the whole operation. I am blessed to have witnessed that as my beginning. My first dance classes were paid for by Don, who figured it we wanted to be dancers, we should train and know what it was all about. It was how I ended up becoming a ballet dancer. I left the show in the '80s to go to Arts College, and then I got my first big job in a Canadian dance company. From there I went on to Europe. I was lured into musical theatre by Andrew Lloyd Webber, and did Cats and Starlight Express. Jive Records met me during that time, and my first record deal was born. They were the company that taught me how important it was to be a onstage entertainer. They put a band behind me and said, ‘Go on tour!” it was a lesson I’ll never forget. Tessanne and I met right after she won on he Voice. I was booked to open for her at a private gig, then we decided to do a song together. It was sooo much fun. She really is a great vocalist, and beautiful too.

Talk about being on your game, and a statment you made: “There is so much clutter. More people are coming to my game with nothing.”

I think new performers think the game is easier than it is. Staying relevant, means re-investing in yourself. Just because you can sing, it is just not enough. You must find all the facets of you to be able to entertain. Your only as good as the last thing you did and that may have already been forgotten. I’m surprised the amount of people that think they want to be performers versus those of us that can do nothing else with our lives. Sometimes I believe it’s a calling. Those that are chosen, must do it, and the spirit makes a way for you to continue to do it. Fame really has very little to do with it all. There are many successful artists we have never heard of, who work all the time. It’s about sharing your gift, not capitalizing on it at all costs.

You mentioned Rod and the Berry Gordy Ideal.

In this business, you must have someone to trust. Berry Gordy [legendary founder of Motown Records] had vision. Sometimes when you’re the artist and you can’t keep clarity with all the noise going on around you. You need someone in your camp that can remember your vision, have one of there own and hopefully merge the two. That’s the sign of a brilliant record company owner, manager or even just friend. Rod has that kind of vision.

What were the biggest risks you took in music?

First, signing my deal with Jive Records. I had no idea what a Record deal entailed. It was simply on a whim that I thought I wanted a deal. I worked hard and it came very fast, highly unusual for the record biz! I had no idea what was coming. The contract was over 100 pages. The highs and lows changed my life forever.

Second, leaving the Jive deal. It was a mess. I was making a ton of money to be a puppet. They told me how to walk, talk, act, sing, even who to date. And on top of it, my A&R man [artist development mentor] hated me, and told me so. It was ridiculous. Some nights I would cry, just realizing I felt like I was in entertainment

jail. They told me on more than one occasion, “We Own You.” One day I had enough and told my lawyer to get me out of it no matter what. I had no job, no career, and very little money when I left. I didn’t know if I would or could ever sing again.

The third biggest risk was signing a deal to write songs for an adult film company. I knew this was a big risk because of the stigma, but I wanted to write songs, and they were willing to pay me so I didn’t have to wait tables. I rented a two-bedroom apartment in Los Angeles. In the second room I said, “One day this will be my recording studio.” Within 2 years, I was running a 24 track digital studio out of that apartment, thanks to the money I made doing music for those movies.

So there is no shame in your game.

The people I met in the adult film industry were amazing. The women were sweet and very kind, and the men all business-like and cool. People think the songs were all “Boom, chika, wha wha” corny stuff… Ha! I was over there writing real songs with bands, beats and background singers. I’m talking full on productions. People were taking notice because I was changing the sound in the industry. I made pop songs to have sex to, and I was damn proud of it. My work was good, and I knew it. One day, I was at the BET [Black Entertainment Television] offices, and they were courting a very well known adult film actress to promote a late night TV show. When she saw me in the offices, she said to one of the VP’s, “that guy is a monster songwriter.” They called me the next day at home and asked for my presentation reel. Within two weeks, I was Music Director of BET’s new television development department. And yes, that job came from making adult films!

There is a big debate now that EDM is empty of content.

I don’t think so. I just think, like with all things, the tide is changing. It had its moment of beats and sounds and images, but I think people just want more. Songs are really the core of music, and its hard if there is nothing to sing along to, or simply hold on to. With EDM, I think in all the technology, the melodies are getting lost and people are noticing. Humming along to machines gets old. A vocal creates dimension. An instrument creates depth. When they weave together, a certain magic appears. When you lose one of those elements, a certain something is lost. The real talent of EDM with survive and the tech heads that aren’t in it to make music, but just create sounds wont survive the change in tide. Rock, country, soul and other genres go through growing pains. EDM is was a baby, now it’s older. I’m really interested to see how it evolves.

Tell us about you, your music, and spirituality.

Me. Driven to a fault sometimes. Lifelong entertainment person, and friend to the end.

My music is an extention of where I am at that time of my life. I write a lot of my own person inside of my songs. I love to watch people have fun and enjoy themselves from my work. It’s a real charge. I am a very spiritual being. I keep so much of my true me buried deep in my heart so there’s a reserve for those I love and care about. That includes my relationship with the Man Above. 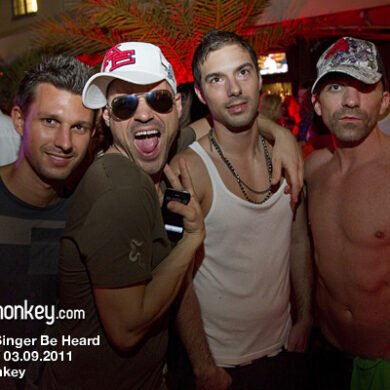 When the Saints Come Dancing In: Day III of Miami's WMC