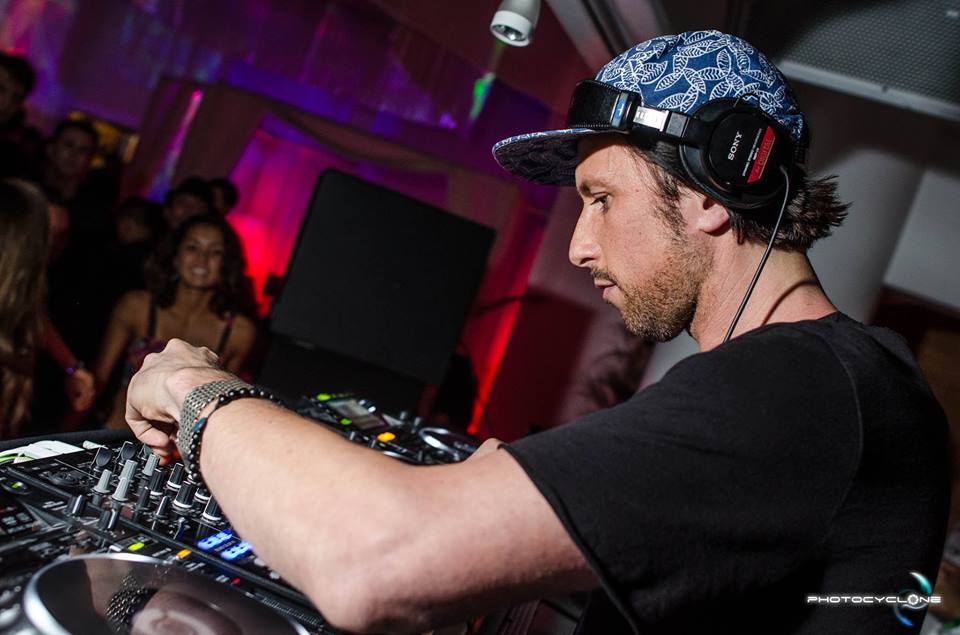 No mouse-head, no fancy clothes, no fanfare, no pop-up hotel in South Beach. Miguel Migs walks into a gig and is easily dismissed by fashion victims who are not in the know. But his no-frills appearance is also his hook. He talks with anyone. No goons clear the way for him. The most intimidating about him is his height, and perhaps his eyes: they tend to measure.

His attitude sets the pace for his live sets: sophisticated, romantic music with a pulse that entices people to the dance floor. As such, Migs attracts an overload of A-list attendees, more than enough to turn the whole thing into a snob-fest. But that would be anti-Migs. Instead, the event becomes a moment when High Society bows before house music democracy, PLUR in designer clothes. Soon after arriving in Honolulu this June, Migs did an interview on KTUH, the University of Hawai‘i-Manoa’s student-run radio station. He’s that kind of guy.

Migs came to the Islands to play a set at Eleven44, a chic club in Honolulu’s Chinatown. The venue matched the man and his music: Eleven44 is a welcoming place that hosts events ranging from Native Hawaiian event after-parties to LGBT fundraisers. The club is elegant in its simplicity of design, generous in dance-floor space (a very real concern in Honolulu, where many dance floors are the size of a postage stamp), and extravagant only in the quality of sound – a perfect venue for an evening with Migs’ brand of deep house.

I’ve only seen Migs in Miami during the Winter Music Conference. His sets attract a beautiful crowd, even for Miami, not so different from that which stepped into Eleven44 that night. But Miami is not Honolulu – the crowd at Eleven44 included beach kids, pro surfers, off-duty military, and the underground house crowd that relish a good night in Chinatown. Migs agreed to do an interview in which we discussed the differences between tropical hotspots, why his entourage always seems to include stunning women, how hate can blindside an artist, and what makes Pharrell’s “Happy” such a winner.

If you could be a trendy resort, which would you rather be: Miami, Honolulu, or Bali?

That question is unfair! Of Course I love Hawai‘i. But first of all, Honolulu is a city and Bali is an island. Both are amazing places.

Bali is gonna be right there – the Hindu culture and people in Bali are so warm and friendly, it’s a special place. I like the diversity in Honolulu – the island of O‘ahu is so beautiful with a lot to explore. Miami is Miami, a big city on the beach but a lot of flashy stuff going on, of course. The city has a big art scene and I have some great friends who live there, so it’s fun.

Well, between amazing places like Bali and Hawai‘i, Miami doesn’t really compare. It’s totally different – during the Winter Music Conference [WMC], South Beach and the music aspect are at full throttle. I get to connect with other artists – it’s the fun of WMC and Miami. But WMC is only for a few days. Honolulu is beautiful all the time. And Miami can’t compete with Hawai‘i’s natural beauty.

Describe what you do.

First and foremost, I love the whole creative process of producing music and songwriting. I also love being able to perform live, to connect with people and turn them on to music through a DJ set. And I enjoy doing remixes sometimes, as that allows you to reinterpret a song giving it your own creative twist.

I first got into house music because I love the diversity and communal aspect – everyone from every race, black, white, gay, straight – all coming together to dance and connect through the music.

My musical influences and inspiration come from a very diverse range of styles, everything from Steely Dan, the Police, Prince, the Stones, Hall and Oates, Sade, the Cure, Fleetwood Mac, Marvin Gaye, Burning Spear, and the list goes on and on… Some of more soulful inspirations connect to artist like Erykah Badu, D’Angelo, Jill Scott – and some of those neo-soul artists from that era. And I love the classic house DJs like Frankie Knuckles, Masters at Work, and a lot of those old school artists.

I enjoy experimenting with my productions and adding in hints of these inspirations. Naturally my productions tend to be on the deep, dubby and soulful side of the spectrum. There is some good deep house coming out lately, but generally speaking, I’m not into the “EDM” stuff [electronic dance music]. Much of it is just too aggressive and noisy. I find it unpleasant. So much is pop-driven, and I don’t really get it.

What about the South African DJs that come to WMC?

Like DJ Black Coffee? They have a really soulful sound going on down there. A few of us almost did an event together this past WMC and combined efforts, but the venue and timing didn’t work out.

Perhaps next year at WMC. It’s the thirtieth anniversary.

Thirty years already? Are you sure? I thought it was twenty something years. I’ve been going every year since around 1997, a lot of good times down there through the years.

Yes, thirty years! So you are more House music than EDM, more WMC than Ultra [the massive EDM festival that happens during WMC, but is separate from it].

WMC and Ultra? You’re talking night and day there. The Ultra fest is mostly trance, dubstep and commercial dance music, and the crowd is mostly teenagers. And WMC has loads of more boutique style, smaller, cooler, one-off events going on all over the city and beach. But let me say that the term “EDM” can be very vast. The same with the term “house,” so the blanket becomes a little confusing for some people. But who am I to correct them?

Every time I see you, you are surrounded by gorgeous women who help you put on your events. I mentioned that to a straight male friend of mine, and he said, “Well, that’s what I’d have around me!”

A person’s looks are not a criterion by any means. Its all about being a good person and bringing a positive energy and good vibe to the event.

The most important thing I want from people who work for our events is to be friendly and courteous to everyone around them. Since we are still talking about the WMC events, I’ve noticed that most of the men hired to work security at Miami nightclubs can be a bit cold. I want my staff to make everyone feel welcome. Jumping to somewhere else, like the gig there at Eleven44, the staff and people were so nice that night. Every time I have played out there through the years, I find that people are always really cool and friendly in Hawai‘i.

There is one negative thing I must bring up. Ever since I met you some years back during WMC, you’ve been a steadfast supporter of the LGBT community. But a couple of years ago, you collaborated with Capleton, a Jamaican dancehall artist who has publicly called for the murder of gay people in his music.

I was not aware of that at all when we were collaborating. I thought it would be an interesting project, mixing my sound with dancehall. My purpose was creative exploration. It’s so unfortunate and really sad that some people can be so hateful and judgmental towards others.

But if you had known, would you have worked with him?

Certainly not! My purpose is to bring people together. Do you honestly believe that I don’t reject hatred and negative judgments with every fiber of my being? I live in San Francisco and grew up in northern California around very open-minded and artistic creative people, so I have always had tons of gay friends.

I don’t believe you are anti-LGBT by any stretch of the imagination. But some people claim that their personal beliefs should not limit their creative options as artists.

I must confess that I am oblivious to much of the world of hate and negativity. I don’t hang around people that have those kinds of views. I was only asked about Capleton once [before this interview], and I was shocked when I heard about his stance.

I got my start playing in some gay clubs. One of my first paid gigs was at End Up [in San Francisco], which is a legendary venue. Straight people as well as gay people still go there. I love the diversity of the dance music community, the communal vibe. It’s a huge part of why I enjoy being involved in dance music.

Homophobia is not fair. It’s not positive. I am not a fan of working with people who spew hate. It’s your right to love whoever the fuck you want.

Back to the music. What current artists do you find interesting?

Within dance music? Its hard to keep up, there are so many new artists out there and so much new music being released. I have my little record label called Salted Music, so we are always getting demos sent to us which is a great way for us to get turned on to up-and-coming artists of different styles. A few artists we have released music from through recent years are guys like Random Soul from Australia, Deeplomatik from Poland, and we have a lot of new stuff on the horizon.

What projects are you currently working on?

I’m releasing a new full length artist album in late September on SoulHeaven/Defected – it’s not named just yet. I’m also gonna start working on a new album with Lisa Shaw. She’s an amazing vocalist with such a unique style of her own, and a great person and dear friend. Looking forward to writing some new material with her soon. Also I’m releasing some track based EPs more for the DJ set and dance floor in mind. So I’m keeping pretty busy…

I fully agree with you about Lisa! Finally, Let me ask you about my favorite new Motown song [joke], Pharrell’s “Happy.”

Thankfully there are still some new songs coming out like that. “Happy” – right when you hear it, you leave your troubles at the door. What’s to hate about it, except that you hear it everywhere? But at the end of the day, when you strip it down and leave all judgment behind, it’s a great song that uplifts the spirit.