Miami was all glam and glitter the evening of March 22 at the Beachplex, a massive white tent pitched near the sandy edge of the Atlantic at Collins and 24th in SOBE.

A parade of electronic dance music stars, industry moguls, fans and paparazzi made its way to the Red Carpet for the 27th Annual International Dance Music Awards (IDMA) sponsored by Kangol. The Red Carpet and accompanying photo-op wall had everything: women in bling stilettos, men in feathers, a mysterious masked fashionista with LED eyes, and a guy in nothing but swim trunks who apparently wandered over from the beach. Such is Miami.

I spoke with a number of singers, DJs and producers, including Eric Redd, Laura LaRue, Yovanni (who sang for me – superb voice), Ultra Naté, Dirty Cow, Bucie from South Africa, Lee Dagger of Bimbo Jones and Spaceman from Planet Zebular. The mood at the Red Carpet was upbeat.

Everybody (except swim-trunks dude) eventually went into the tent. A Kangol booth had been set up to one side, and two attractive women handed hats out to nominees. One of the hotties, Nicole Otero, is also a great DJ. By the time everyone was seated, Kangol hats were perched on heads throughout the audience.

The producers of IDMA make sure to have serious talent lined up as performers and presenters. Performers included Nadia Ali, NiRé AllDai, Neon Hitch, Porcelain Black, Rye Rye and Zaki Ibrahim. Here are some highlights:

Zaki Ibrahim was first up with “Firefly.” She is a tall woman, statuesque in fact, with a beautiful voice and a gorgeous afrodeep house song, definitely a hard act to follow.

When her turn came, Nadia Ali hit the stage with 2 dancers who moved as she sang a cappella, as if the sound system for the DJ had gone out and the 3 of them had to make do. But the beats kicked in by the time Nadia hit the second verse, so we were able to hear her with and without accompaniment. I caught up with Nadia after she left the stage and told her that her move was a bold one to start her performance on the power of her voice alone, considering how many singers and critics were in the audience. She smiled and said, “I just wanted to do it on my own.”

Neon Hitch did “Fuck U Betta” in a dress made with green-blue circles, setting off her bright red hair. Backing her up were 2 men playing djimbe drums. She finished the set by doing a forward split, quite a trick when in formal wear and heels. If the production seemed a bit over the top, keep in mind the name of the song.

My favorite of the evening was NiRé AllDai, a young LA woman who performed her single, “Inside Out.” It is a catchy pop number that, due to autotune, does not let the listener appreciate fully the fact that NiRé has a first-rate voice. Gifted in more ways than 5 minutes on the stage could portray, Ms. AllDai wrote the lyrics to “Inside Out” herself. And she has heart. Part of NiRé’s inspiration comes from her grandmother who started an organization in South Central to help disadvantaged youth by teaching them how to perform before an audience. Like her grandmother, NiRé strives to stay true to her talent and her community.

But there was one performer not on the bill who stole the show. Daniel Glass hosted the awards, and there was an extended tribute to him that was pretty tame, as tributes tend to be. Until his mother-in-law of vintage years, Twinnie Weiss, literally rolled onto the stage, spoke some words into the microphone, then lifted her left leg straight into the air next to her ear and held it there. When I asked Daniel for a little information about such a phenomenal woman, he did not reveal her age (smart move for a son-in-law!), but he did say that Twinnie was once a can-can dancer in the Latin Quarter of Paris.

I spoke to Twinnie about her show-stopping move. “What gym do you go to?” I asked her. Amused, she said, “You can do it too if you start training when you’re 4.”

Performances were interspersed between awards. which were presented by singers and DJs. Presenters came to the podium in twos, sometimes in standard pairs such as Gabriel and Dresden, sometimes in interesting combinations such as Deadmau5 and Ultra Naté, or singer Julissa Veloz and Lawrence Washington of Real Housewives of Atlanta.

Overall, it was a great mix of people from all over the EDM spectrum, from Kaskade to Carl Cox. 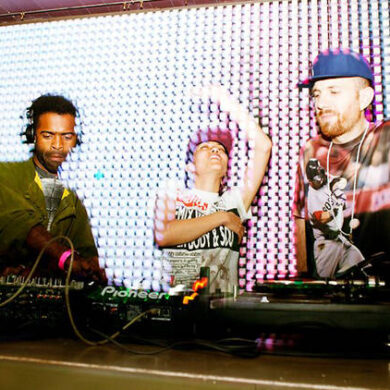