Racism is officially dead in the USA.

This is not to say that racism does not exist – it is a zombie virus to which the ignorant of any race or ethnicity are especially susceptible. And ignorance is by no means an exclusive province of the lower income strata. Witness how many financially prosperous and politically well-connected people either express the racism that grips them like a flu they just can’t shake, or cynically pimp it out for personal gain.

Similar to something out of The Walking Dead, racism still sweeps through whole populations in pandemic proportions. As with a troublesome stomach virus, racism passes quickly through a healthy population and fades away.

A quick study of the epidemiology of the disease shows two important features: it is passed from adults to children, and is amplified from group to group. When a population is inflicted with racism past a certain tipping point, all it takes are a few untreated patients on either side of a dual antagonistic configuration to dramatically increase the rate of infection. For example, if enough chronic White racists use coded phrases like “Obongo,” they trigger their counterparts in the Black community to use a common tactic in retaliation: Snub Whitey.

As a White man who is moved by joyful Blackness found in Afro-deep house music, I used to approach venues at WMC that played soulful underground dance tracks with a degree of trepidation. But I’m also a Gay man, a potential double-whammy, so I learned to not give a shit, put a smile on my face and dance when the spirit moved me. At the core of my beliefs is this: I am a richer human being when my internal world reflects as many different races and ethnicities as possible. “Colorblind” is not an option – I rejoice in difference rather than erase it.

I first met the good people of Are You Afro? last year when I was irresistibly dragged into their venue by the rhythms coming forth as I attempted to walk by. With a name like “Are You Afro?” I was afraid that I was not Afro enough. Pretty much everyone else there was, so I felt conspicuously mizungu, and I feared I might get The Snub. So I put on my game face, baptized my fears in the river of sound flowing from the speakers, and danced.

I was made welcome.

I saw them again this year, and was greeted by Gale Murphy. “We’re not interested in bringing in famous DJ,” said Gale. “We are a showcase for the future stars.” Her words weren’t empty bravado – names such as Jellybean Benitez, Ray Vasquez and Osunlade stopped by to savor what was cooking on the decks.

Gale introduced me to a host of people, including Ray Vasquez, Dave K, Adam Rios, J-Busy, Montana, Max Pela and my idol, Osunlade. Gale gave me an Are You Afro? T-shirt featuring a silhouette of a face in profile sporting a legendary natural. I’m sure that me wearing a shirt with an Afro-ed head on it (and with “Are You Afro?” in big letters) would have been verboten 10 years ago for one of my apparent tubob-itude to wear in public.

As expected, the music was choice.

Just a few blocks down Collins at a place called the Cha-Cha Rooster was the Soulistic event, sponsored by DiverseCity Productions. Ed Dunn and Jennifer Grey were there to welcome everyone.

The threat of rain kept people away for a bit, but by 5 pm the crowd came in, a nice mixture of Southern Africans and Americans. I heard Ed, DJ Angelo from Greece, Shimza and Black Coffee from SA (South Africa) work the booth, which was ground level and accessible (both visually and spatially) to the crowd. All four DJs brought it.

DJ Angelo is a bushy-headed, bearded White boy with who knows his SA Afro-deep sound. He produces Global Fantasy, a production that brings together house music DJs from all over the world. The SA sound is gaining ground in Greece, he said, a good indication that the movement begun by Black Coffee and his fellow DJs grows increasingly international and popular. “I want to have a Global Fantasy party at WMC next year,” he told me.

I will wear my Are You Afro? shirt with pride, wherever and whenever I please. Anyone, regardless of race, who finds it inappropriate will not elicit shame or resentment from me, only pity because they are not well. Their discomfort with me is a sure symptom of the zombie virus.

Just like the latest version of the cold or flu, none of us is 100% immune to racism. But most of us recognize it for what it is and have the courtesy not to spread it when it sneaks up within our own psyches. 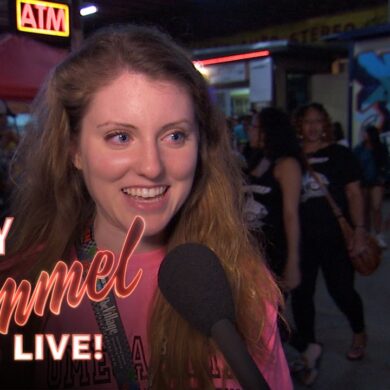 Watch These Attendees Of SXSW Pretend To Know Fake DJs