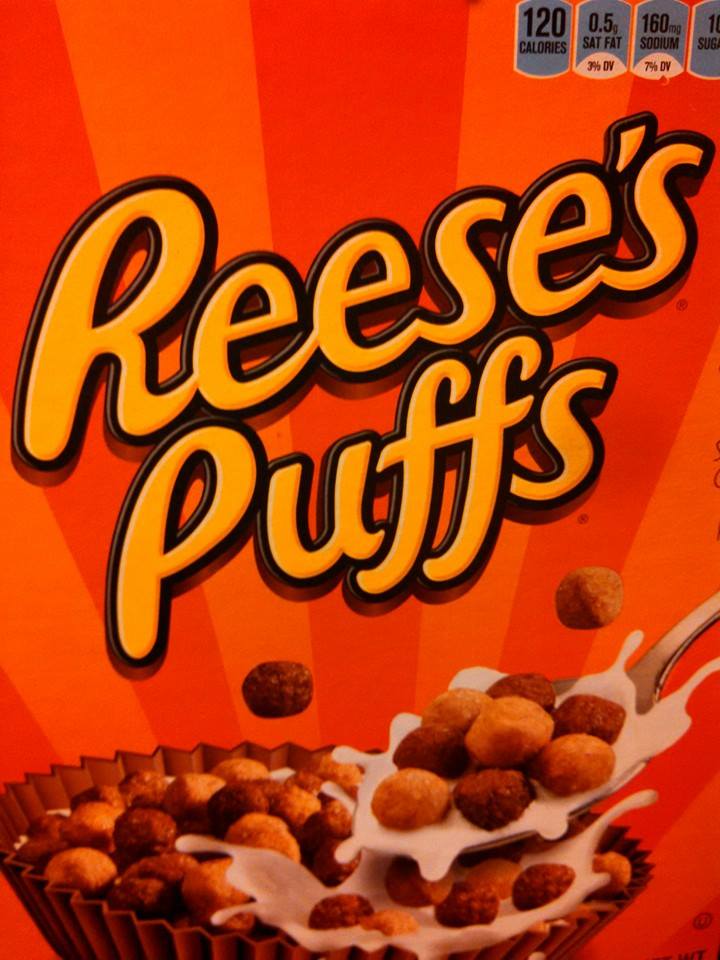 You Too Can Be a DJ: Just Follow Instructions on This Cereal Box 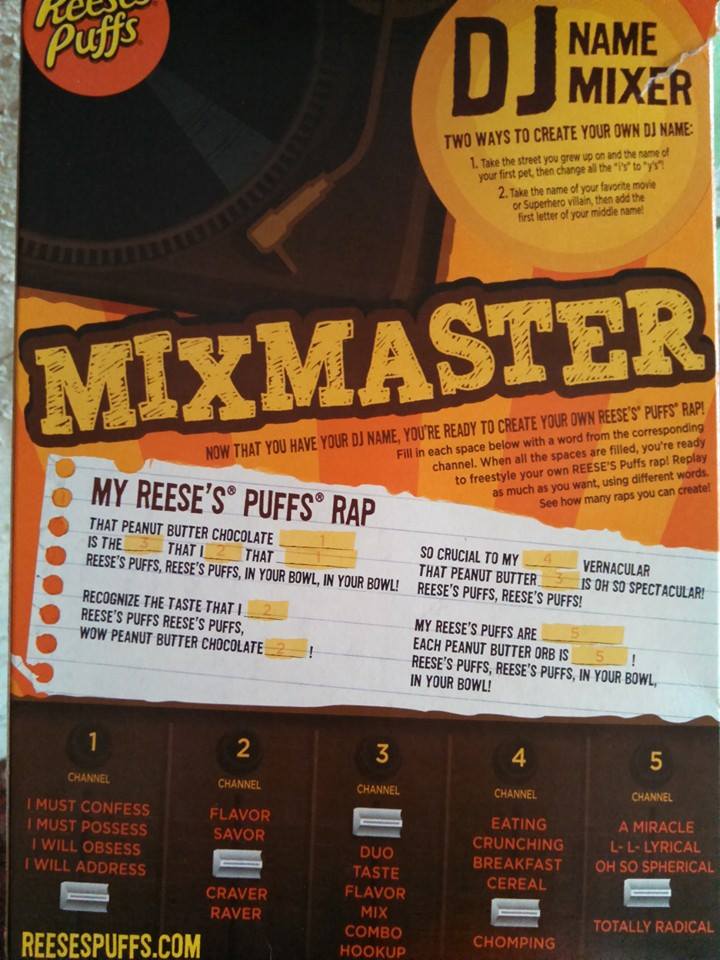 My destiny appeared to me when I took out the rubbish the other day.

I noticed a Reese’s Puffs cereal box atop some full trash bags. At first, I paid it no mind and went back inside. Then I realized it was my ticket to fame and fortune as a DJ superstar! I ran back and grabbed the cereal box.

According to Reese's Puffs DJ NAME MIXER, there are two ways to create your own DJ name: 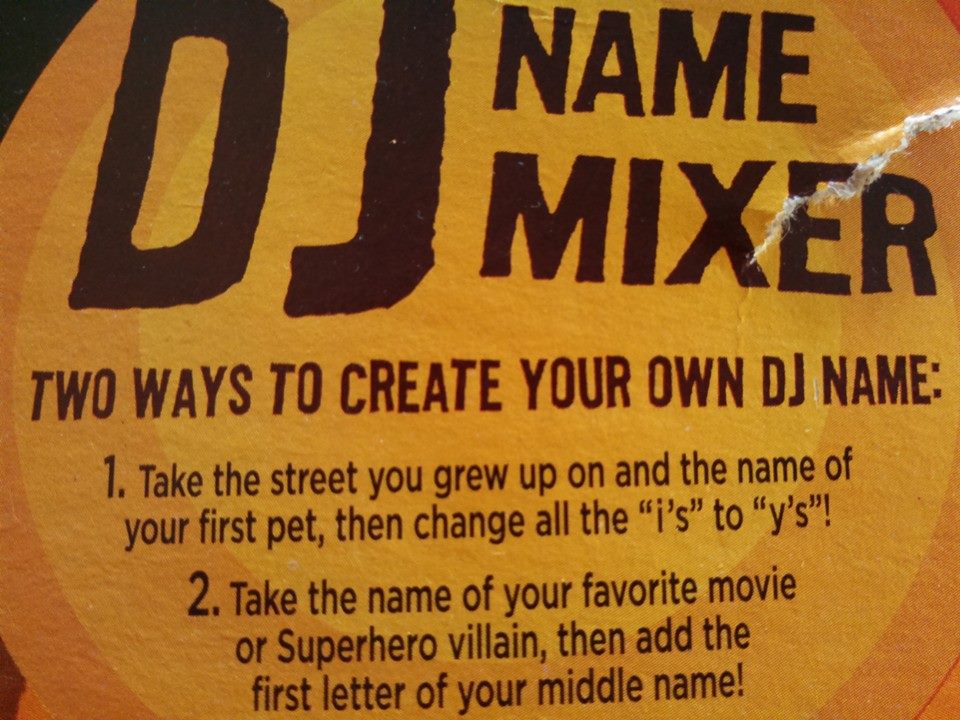 Let’s start with Option One. I grew up on a road called Miss Annie’s, and our first pet’s name was Kitty Shark (after the British sailing ship the Cutty Sark, Lord knows why). Myss Annye’s Kytty Shark – a bit clumsy. I’d settle for Kitty Shark: cute and dangerous at the same time, like Krewella or Chainsmokers.

Option Two: My favorite villain is The Governor from Walking Dead. But I’m confused as to what I should do next. My middle name is Ray, so I would add R, but where do I add it? Would my name be The R Governor or The Governor R? The Grovernor? The Governorr? Ther Governor? Ermagerd.

So it’s “DJ Kitty Shark” by default. To jazz it up even more, I’ll deadmau5 it: 5 instead of S, pi (π) instead of tt, Spanish inverted exclamation point (¡) instead of i, and @ instead of A.

But there’s more. Every good DJ should have a sick rap: 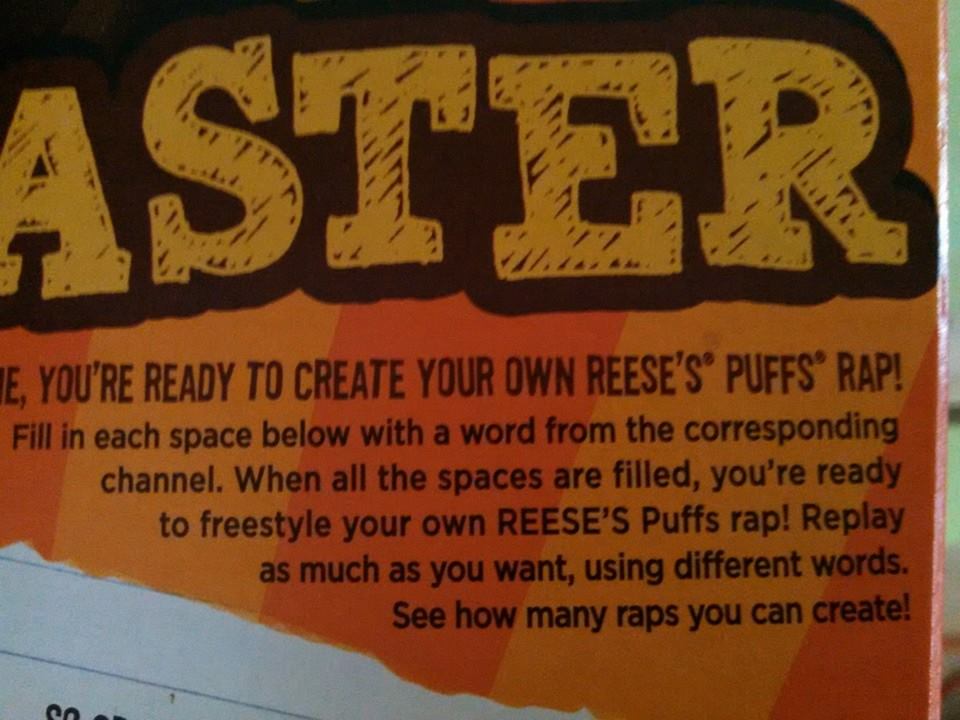 This part is amazing for four reasons:

1. The assumption that all DJs rap

2. The use of a mixing board to help teach young 'uns to spit rhymes

3. “Freestyling” means using prewritten material given to you by somebody else

4. Teaching children the words “hookup” and “raver” (I can see it now: some eight-year-old saying, “Mommy, who's Molly?”) 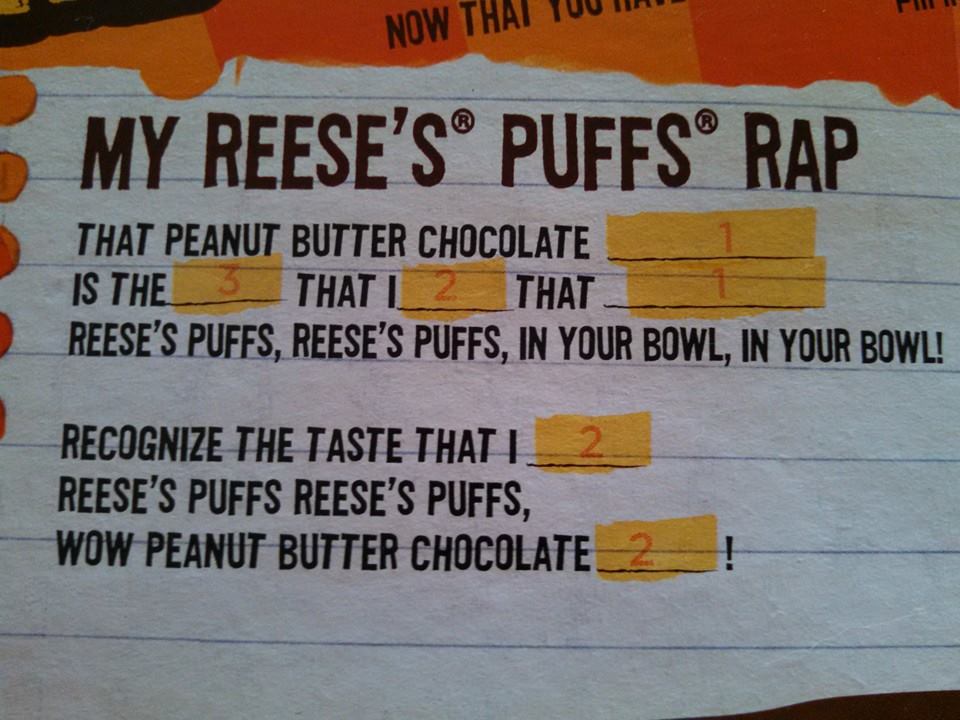 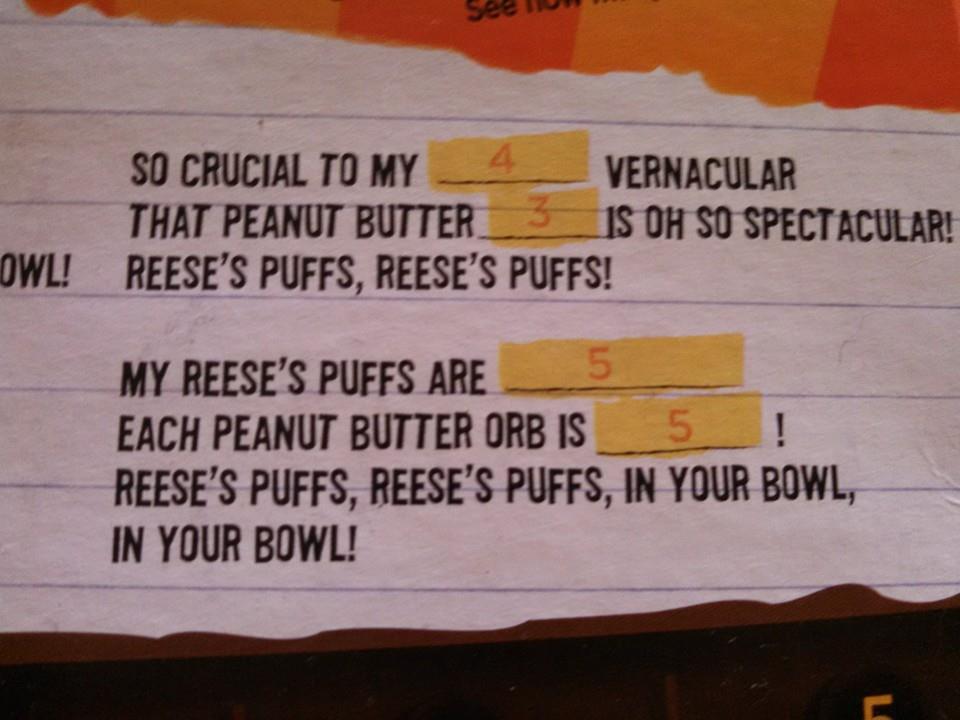 Here are the five channels on the mixing board: 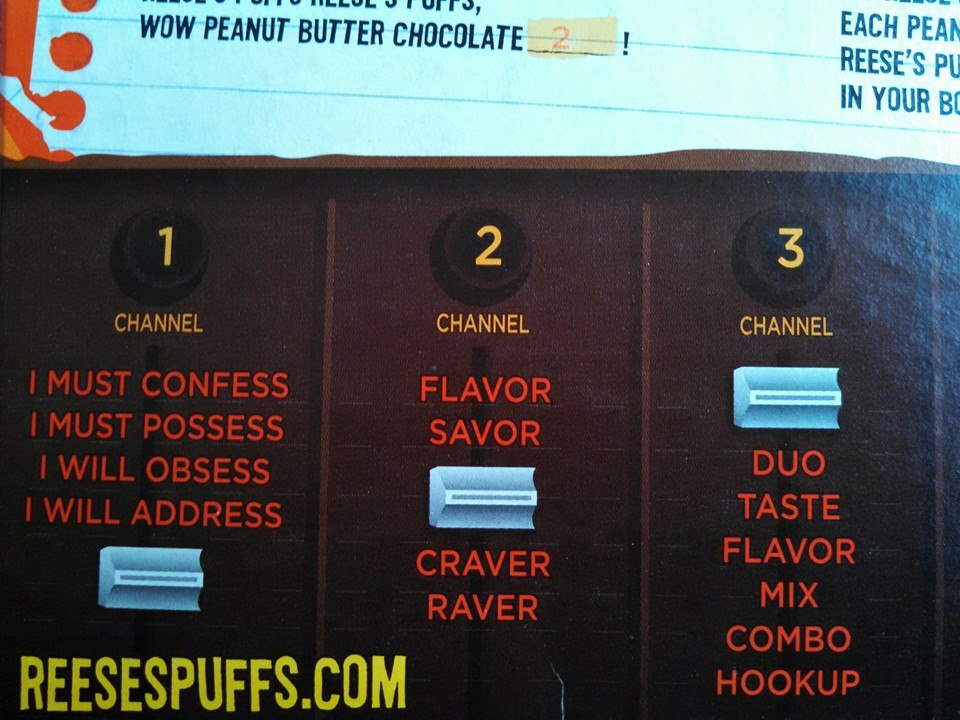 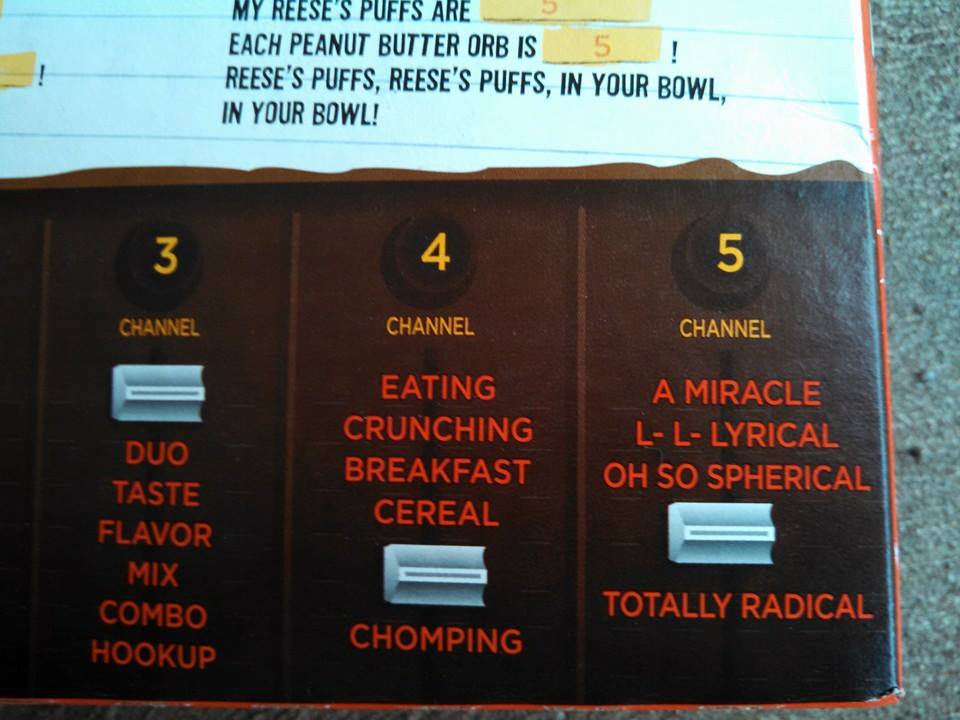 The Marketing Department for Reese's Puffs appears clueless beyond belief. Then again, maybe this is a slicker marketing ploy than it looks. Maybe the point is to appeal to strung-out ravers who are fiending for cereal after rolling all night and hooking up. 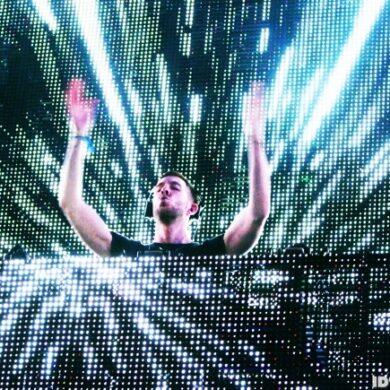