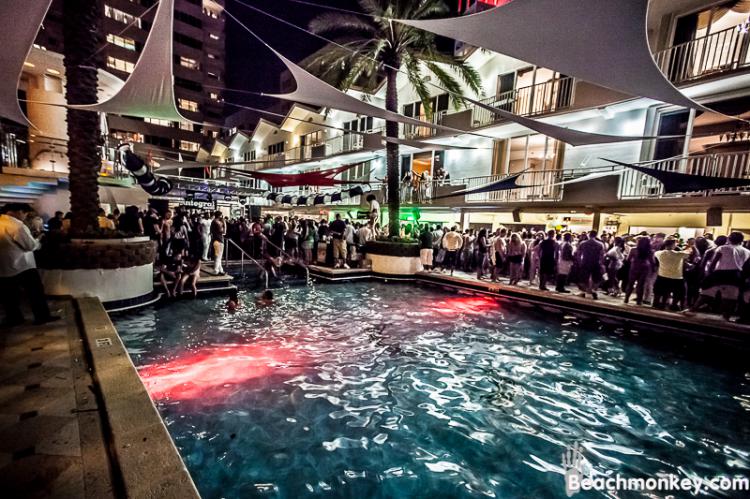 Shine nightclub, inside the Shelborne Hotel, has gone out of its way year after year to bring in a slew of talent. Dennis Wheeler is the man at the Shelborne who makes everything go smoothly and ensures that everyone has a great time. He handles the list at the front of the line, always seems to be in a good mood, and greets each person with a smile. Dennis has always taken great care of us and even gives us VIP wristbands so we can take pictures inside the VIP section.

This year’s IDMA (International Dance Music Awards) were held at the beautiful Dolce Nightclub in the heart of South Beach. Even though we got our press credentials at the last minute, Travis got us on the guest list. He even made sure that our photographer got a VIP press pass seconds before the ceremony began. Each award was presented by icons of the industry, and about every two awards were followed by great performances by such artists as Chris Willis, Dev & The Cataracs, Zakes, Emii, Grace, and Wynter Gordon. Katherine Ellis performed at the after-hours with the powerful voice of a true diva.

Best Crew to Stay Up With till the Next Day: Bimbo Jones and Friends

We had the pleasure of interviewing Bimbo Jones two years ago at the WMC. Time and time again during the week, we continuously ran into this motley crew. We would end up at the same parties, and even the same restaurants. The group was always full of energy and laughter. There was no one better to stay out till the cows come home. It consisted of Lee Dagger, Marc JB, Katherine Ellis , Carlos Vasquez , Sally Freeman, Terisa and Matty Abrahams, Matthew Ward (Dj Matt Vinyl), and Stephany Lobban (DJ Dakota).

Year after year, the Shelborne Hotel has a unique ability to pull in the best talent and throw the best pool parties. Even the shape of the back deck area lends itself to being ideal for WMC parties. The Shelbourne’s VIP lounge is filled with plenty of comfortable couches and tables. Our only wish is that the DJ booth was a bit closer to the crowd. The parties are always lined with the hottest patrons moving in unison to the music. Hard thumping beats, beautiful people wearing next to nothing, and a great set up make this our favorite pool deck.

We had the pleasure of meeting Violet Gomez, the GM of Maxine’s (Maxine's at the Catalina Hotel). This Dominican beauty ran a tight ship and had the place humming and serving food 24/7. She told me her goal was to create an atmosphere that was hip yet relaxing. The layout of Maxine’s reminded me of a swank living room with tons of couches, giant pillows and candles. We recommend that you give the California Frittata a try. It has a thick egg base that is light and fluffy on the inside and has a thin crunchy coat on the outside. It’s topped with avocado and provolone cheese.

Best Event to be Glad You Attended the WMC: South African Miami Invasion

In much of South Africa, the name of the game isn’t hip-hop, it is HOUSE, deep house. Black Coffee headlined this show at the South Seas Hotel, and it was standing room only. The back deck of the South Seas was filled with beautiful South African people dancing and singing (sometimes in Zulu) to rhythmic mixes blasting from the center stage. This is what the WMC is at its best, people from all over the world sharing their love.

For the second year in a row, Gabriel and Dresden preformed together in this rare set since splitting up after the WMC 2008. This also seemed to be an industry favorite because we ran into numerous DJ’s in different corners of the club. The Euro-mix crowd of fanatical Gabriel and Dresden fans was whipped into a dancing frenzy at every new track.

Skye invades Miami 5 took over the main floor of Maxine’s and produced some heavy house sounds. We got there as soon as Donald Glaude took over the decks and had the place pumping. The thing about a good DJ is that they can turn an empty place into an instant hit, and Donald Glaude was no exception. That is one of the great things about this year’s WMC, the amount and quality of the small venues.