Far away in the middle of the Pacific ocean, a beat kicks to the sounds of deep tropical bass grooves and melodies, created by a diverse group of talent that would not have come to fruition had it not been for some serendipitous encounters. They are Sandwich Island Bass (SIB) and the music they make is moombahton.

Moombahton was created by chance at a propitious house party in the fall of 2010 in Washington DC by scene leader Dave Nada. Combining the sounds of Dutch and Electro-house with the tempo and feel of reggaeton (think dem-bow) Moombahton has been making some serious waves in the world of electronic dance music (EDM). The top talent in the moombahton scene include the likes of Munchi, Sabo, Melo, Pickster, Nadastrom, Heartbreak, Big Makk, Mendez, Sazon Booya and Bro Safari. The scene is also attracting the industry's top bass music producers like Knife Party, Feed Me, Diplo, Switch, and Dillon Francis.

The trifecta of Sandwich Island Bass is made up of Joti Mangat from the UK, Rudy Castorina from France, and Darren Quinsaat from Maui. They live in on the island of Maui in Hawai'i, where they create clean, punchy electronic sounds with eclectic tropical melodies and grooves.

It began a little over a year ago when Maui vocalist Karen Be was working on some of her original music. Celestial objects aligned and Sandwich Island Bass was born.

Upon formation, their debut track “Silver” was released on a GenerationBass compilation titled Moombahluv III. It caught the attention of moombahton blogs and many industry scene leaders, including Rotten Ralphie and Mr. Vega, owners/operators of Rot10Musik. A year later and now up to their eyeballs in original banging music, the trio has just launched its debut release on Rot10Musik entitled Sandwich Island Bass Vol.1 (click here to purchase). Already cracking on the Beatport top100 for house music, the EP is an incredible work of original music and is currently receiving plenty of rinse treatment on the dance floors around the world.

I was fortunate to travel to Maui last weekend with the O'ahu moombah crew and caught SIB perform at their EP release party in Pa'ia. Nestled in Maui's beautiful north shore, Pa'ia is a quiet one-stoplight plantation town that morphs into a raging block party every 4th Friday. I had heard great things of the town before traveling there, but had no idea of what I was getting into until I walked three steps out of the taxi. I had entered a heart-warming vortex of open-minded people, music lovers, time travelers, and everything non-aggro in between. I know that if I stay there longer than the weekend, my Gonzo Fiction career will launch in no time… it’s that kind of place.

Shortly after I found the stage, members of SIB pulled up at the same time to set up. O'ahu and Maui moombahton massives are together in one spot! After a quick meet and greet, the bass begins. Almost as if someone flipped a switch, the area was filled with party goers of all sorts – the police are already having trouble with the growing number of people overflowing from the parking lot into the streets.

Pa'ia is the place where you come to get loose and dance regardless if you know how to or not. With Sandwich Island Bass on the decks, it is almost impossible to not bounce to the tropical grooves blasting from the sound-system. At the end of the set, the crowd wanted more, I wanted more, we all wanted more, but town officials promptly ensured that the power is off when the event hits its time limit. I was (and still am) puzzled as to why an island with a tenth of the population of O'ahu has a Moombahton scene that is larger than O'ahu’s, all the while the screaming crowd chanted “one more song!” over and over. But hey, when you have the talent such as three guys in your own backyard, it is actually no suprise.

For those on O'ahu or traveling here, be sure to check out Sandwich Island Bass at The Loft on Friday July 20th for their O'ahu release party, brought to you by GreenMinded Entertainment. And for those who don't know yet, don't wait to see Switch at LoveFest and figure out what Moombahton is about. You will be getting a proper dose the night before at The Loft.

Shaun Coon is a freelance writer for GreenMinded and Vortex. He is O'ahu's premier moombahton and trap DJ, performing under the name CoonDog. Check him out at his blog: GreenMindedLife and SIB at facebook.com/SandwichIslandBass. Click here for video. 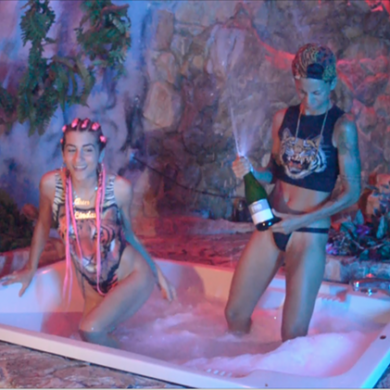 Welcome to Miami: No Bras, No Panties.