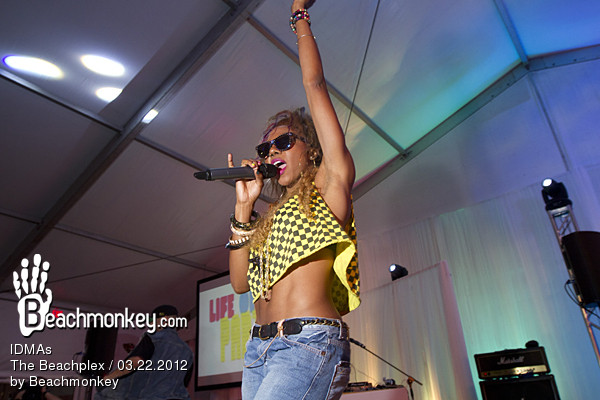 Day 8 of WMC: I’m worn out from a nonstop schedule of forums and events. My feet hurt from walking all over SOBE and dancing at least 4 hours every night.

But I have duties. Mike Beachmonkey Luczaj of beachmonkey.com had set up an interview with NiRé AllDai, an up-and-coming singer who I’d seen the night before when NiRé performed her hit song, “Inside Out,” at the International Dance Music Awards (IDMA).

Problem was that I wasn’t staying in SOBE, and traffic got the best of Beachmonkey and myself as we crawled our way to the Shelborne Hotel in the heart of South Beach. I was an hour late for the interview.

Thankfully, NiRé waited for me, despite not having breakfast (it was past noon when we got together). She must have been starving! But she didn’t show it. I met her in the Shelborne lobby. We found a quiet place away from the hotel guests and the thousands of partiers headed to a massive pool party, just 2 hundred yards from where we sat.

NiRé is a tall, slender woman, dressed in a mix-match of color that would make Mondo proud. We connected on mutual love of the ocean. Born and raised in LA, she loves her hometown and the vast Pacific to the west. “I’m a beach baby,” she said.

Besides impeccable fashion sense (the mix-match worked), NiRé is wise beyond her 24 years and overflowing with talent. She writes the lyrics to her songs, including “Inside Out.” Her agent, Marissa Perez of Walk on Water Productions, told me that NiRé is hands-on when it comes to production as well as lyrics and vocals.

NiRé is not just another pretty face with an Auto-Tuned voice. To alter her voice in any way, in fact, should be a felony.

I’d already heard her sing at the IDMA. But I am a doubter at heart. What if her voice had been enhanced? How do I know Ms. AllDai can bring it? Proof positive was handed to me in the course of the interview. NiRé sang “Inside Out” to me in a soft, clear voice, right there in the Shelborne lobby. Let me be a witness: girlfriend sings like an angel. I asked if she had been professionally trained. No, she said, but she has bee in a gospel choir.

Singing just came naturally to her. “I’ve always been interested in harmonies, even when I was a kid,” she said. “My friends in high school used to ask me to sing for them. I never thought too much about it until then.” Singing is also in her blood. Her grandmother, Gerri Reid, was a singer in Detroit before moving to Los Angeles. Gerri was also a compassionate woman who cared about young people. She started a youth organization in LA’s notorious South Central to help young people express themselves through performance rather than crime.

“I have 4 angels around me,” said NiRé. “My grandmother is one of them.” We talked about angels, the sacredness of the sea, and spirituality. That discussion shall remain between NiRé, myself, and our angels.

I asked her about influences in the music world. Among several artists (Madonna, Outkast, Drake, Li’l Wayne, Beyoncé, TLC, Enya, James Taylor and the Carpenters), she is crazy about Adele. “She is winning on all levels,” declared NiRé. Recognizing that Adele’s heartache is the key to her success, “It’s literally golden tears. Kudos to that guy for f-ing her over!”

That is an exact quote: always the lady, NiRé said “f-ing,” not the F-bomb. “My mom taught me that class and being yourself go a long way,” she said.

Indeed. I believe NiRé will go a long way, all the way to stardom.