It is the biggest, fastest-growing ethno-genre of EDM in the world, with an international fanbase in Asia, Africa, Europe, the Americas, the Middle East, and Australia. Considered the standard-bearer for the Korean Wave of cultural products flowing out of the small nation, K-pop (Korean pop) is a hot commodity in places such as Uzbekistan and Zimbabwe.

And two of its brightest stars, G-Dragon and CL, are featured in “Dirty Vibe,” a song that is an IDMA finalist in the “Dubstep/Drum & Bass Track” category this year.

A blip of the phenomenon occurred during the IDMA (International Dance Music Awards) a couple of years back when Psy was riding high with his hit, “Gangnam Style.” but that was just the tip of the technicolor Korean iceberg. Backed by the South Korean government, K-pop is a national industry: a wildly successful mix of hi-fashion, eye-popping videos, easily exportable dance moves, and American pop sensibilities (including a big dose of hip-hop), all in a G-rated package that audiences in conservative and progressive societies alike cannot get enough of.

Except, of course, the government of North Korea.

Big names in EDM have taken notice. “Dirty Vibe” is from heavy-hitters Skrillex and Diplo, with rapping by G-Dragon and CL. The beats are hard and fast, and the video is slick and professional. G-Dragon and CL break away from conservative Korean restrictions, using English obscenities and at least one reference to illegal drugs. Keep in mind that Psy’s video for his song, “Gentleman,” was banned in South Korea because he kicked a traffic cone, so the breach in protocol reflects a shift in K-pop’s image, at least in songs made by non-Korean artists.

Going strong since the 1990s and riding the Korean Wave started by Korean TV dramas, the K-pop industry is tightly controlled from top down. Aspiring performers audition for the chance to make it big. If accepted, they go through rigorous training in dance and language, with emphasis on English, Japanese, and Mandarin. East Asian sensibilities of rank are imposed upon the rising stars – they must treat those who debuted before them with respect as their seniors. Each of the bands (which can have as over ten members, none playing instruments) has one senior member who is expected to keep the rest of the crew in line. Young women and men who are starting out are given menial tasks. G-Dragon, for example, had to fetch water bottles when he began his journey to fame and fortune. Young men in K-pop are also expected to pair up and act out bromances with each other for their star-struck fans, who report every cuddle and cutesy term of endearment on sites dedicated to songs, dance moves, and personal lives of their idols.

G-Dragon started out as a pretty boy whose fashion sense, hair, and makeup bordered on cross-dressing:

These days, he is doing his best to look gangsta, but comes off a bit too much like he is appropriating hip-hop instead of appreciating – he treads a thin line between street cred and minstrel show. Better he stay in the sultry, gender-bending category for which he was internationally famous.

For her part, CL pulls off the Naughty Girl look with style. Raised in Paris, Tokyo, and Seoul, she possesses a relentless drive that took her to the top of the K-pop elite. Here she is, leading her girl group, 2NE1:

Her intelligence is reflected in her sense of sassy rather than playing to faux-ghetto stereotypes. The most gangsta she gets is when she wields her water-gun of choice from an arsenal of them behind her – she doesn’t even try to look street-hard, and she’s cooler for it. G-Dragon, take note.

Overall, “Dirty Vibe” is a decent musical effort. We look forward to more collaborations such as this. 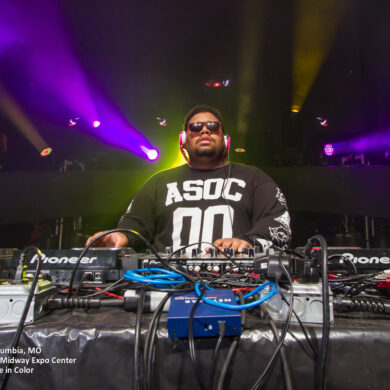 Want Hardwell to spin at your next party?